Mula Gula placed third twice and fourth once in three starts at maiden level in Washington, and Team Gula–completed by trainer
Steve Bullock and jockey Gallyn Mitchell–took their chances in stakes class in the W.T.B.A. Lads Stakes at Emerald Downs, the horse’s fourth career start. Before the race, said Bullock, “Steve was a little worried. I told him, “Don’t worry. Everything will be fine.'” And the outcome? Mula Gula ran away with a facile victory to break his maiden.

“Me and Steve Bullock just couldn’t wait until we could go two turns. This colt is bred to go long. He is such a nice horse. I always knew he was,” said Mitchell. “It was an upset, but not for me. I think this colt will just continue to improve.” 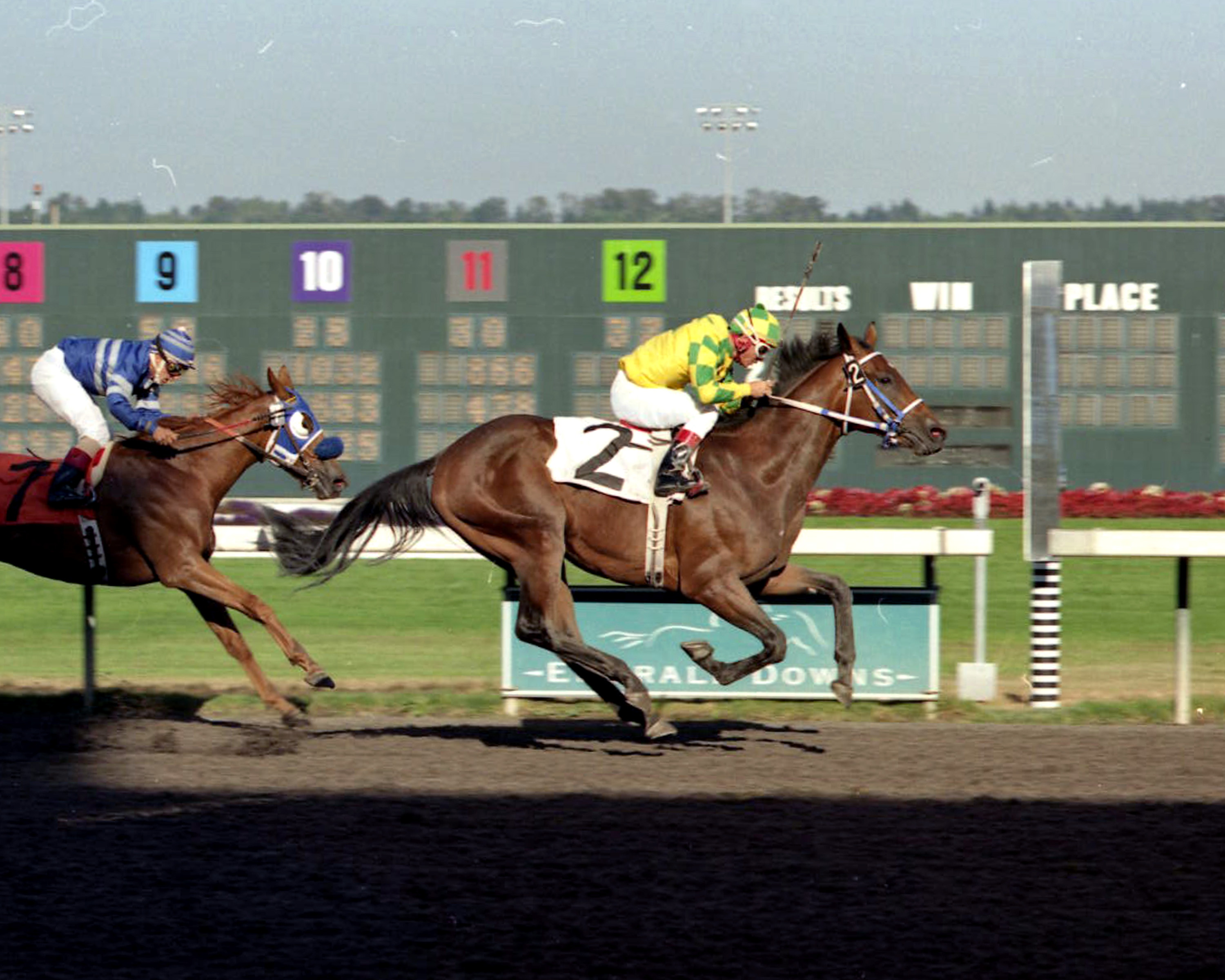 Gula was slightly more incredulous. “I couldn’t believe,” he said after the race began to sink in. “I didn’t know it was my horse. I took three or four looks to make sure it was my horse. This is a wonderful feeling.”

Closing out his juvenile season, Mula Gula finished a controversial second in his next race, the $90,000 Gottstein Futurity, where a claim of foul was lodged against the winner for interference, who was allowed to keep the first-place title. By the end of 1998, Mula Gula had bankrolled $44,100, representing a significant return on Gula’s original investment. If the story ended here it would be called a triumph. But the story was far from finished. 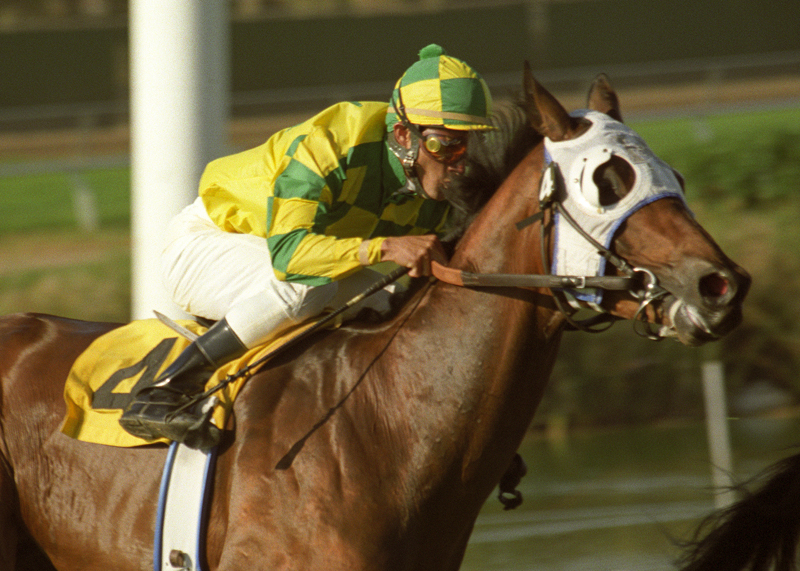 Making their move at Del Mar. Alex Solis and Mula Gula preparing to pass horses in the stretch en route to an emphatic victory in the Oceanside Stakes on July 22, 1999.

For his three-year-old career, Mula Gula was moved from Bullock in Washington to the barn of leading Northern California conditioner Jerry Hollendorfer, where the colt was second in an optional claiming race and won an allowance race on May 8, 1999. “He ran well in those, and we figured he really doesn’t want to sprint at all, so we think we have a pretty good horse,” Hollendorfer said. 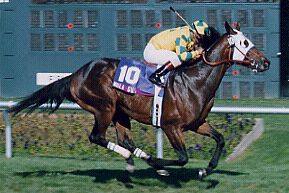 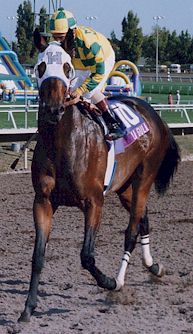 Mula Gula ran second in the $125,000 California Derby before attempting graded stakes company for the first time, registering a fourth-place effort in the Affirmed Handicap-G3. In his first start on the turf, Mula Gula won a division of the Oceanside Stakes by 2 1/2 lengths before going on to capture the Bay Meadows Breeders’ Cup Derby-G3 and the Oak Tree Derby-G2. In the nine-furlong Bay Meadows BC Derby, Mula Gula stopped the clock at 1:45.34, establishing a new course record on the turf at Bay Meadows.

Mula Gula’s ground-eating stride effortlessly carrying him over the turf course at Santa Anita Park while running away with the Grade 2 Oak Tree Derby. “Everyone is very excited. He’s really taken us over the edge,” Gula has said. 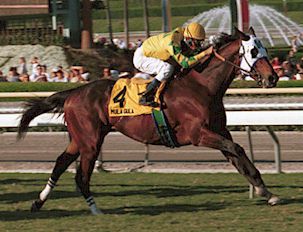 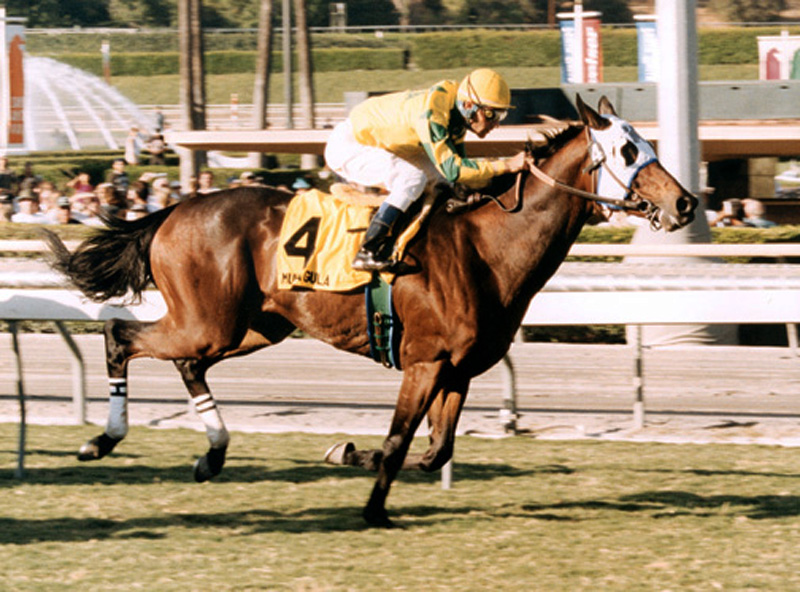 Following the Oak Tree Derby at Santa Anita, the national news magazine Thoroughbred Times wrote, “Steven Gula’s Mula Gula is quickly marking himself as one of the premier three-year-olds on the turf after he won his third stakes race in four starts in the $250,000
Oak Tree Derby-G2.” Gary Stevens, who rode Mula Gula in the Oak Tree Derby, told Gula that, as a four-year-old, Mula Gula would be
Breeders’ Cup material, and “that made my heart pound about 300 beats per minute,” Gula said. Stevens went on to say, “He came really
powerfully and should improve with age because he’s still green and looking around. He’s so good and does things so easily that he just loses focus.” Gary Stevens, one of the greatest jockeys of our time, told Gula not to accept any offer less than $2.5-million for his budding star. 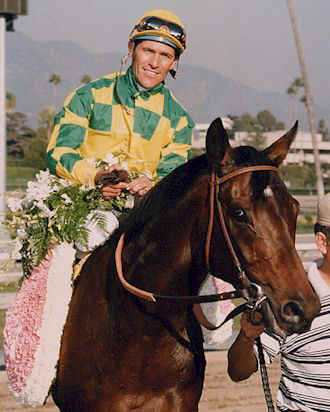 Mula Gula wearing the garland of flowers after his win in the
Oak Tree Derby at Santa Anita, his third stakes victory in a row. A beaming Gary Stevens was impressed by his first ride on the colt. “Tons of ability, a long-striding colt that’s going to mature with time. He really doesn’t know what he’s doing right now,” said Stevens. 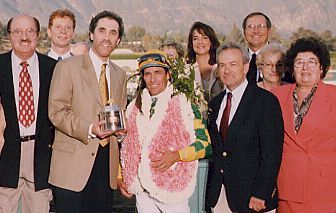 By year’s end, Steve Gula was receiving all kinds of offers for his $6,000 horse, ranging from $250,000 to $1,600,000. Gula told a reporter that “logic tells you to take the deal. But there’s no logic in horse racing.” Gula turned down all offers. In an article in the Seattle Times, Dick Rockne suggested that “Steven Gula of Mercer Island is either (a) smart, (b) dumb or (c) both. One thing for sure: he’s (d) lucky.”

The lucky neophyte horse owner summarized it perfectly when he said, “I’m told some people buy 100 horses and don’t get one like this. At this point it’s more than the money.” In fact, Gula’s mother Bea once said, “I have three children. Mula Gula is like a fourth child.”

Crowned champion Northern California three-year-old colt of 1999, Mula Gula was given a nearly six-month hiatus from the races and made his four-year-old debut in the seven-furlong, Grade 2 Winnercomm H. at Churchill Downs on the Kentucky Derby undercard, hours before $4,000,000 yearling purchase Fusaichi Pegasus won the Kentucky Derby. This $6,000 foal had rocketed his owner to the big time. “Muhammad Ali’s box is three away from mine!” Gula said and then watched his horse run a gut-wrenching second by a head to Straight Man. “I’m overwhelmed. Can you believe it? Another step and I believe we would have won the race. All of a sudden as the horses approached the finish everybody around me is pounding me on the back and yelling, ‘Your horse is first . . . your horse is first.'” 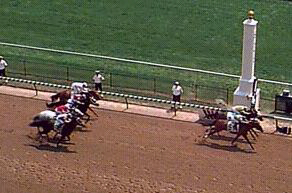 The Mula Gula phenomenon, on May 4, 2000: second to Straight Man by the bob of a head in the Winnercomm H.-G2 at Churchill Downs, his first start since November of 1999, lengths ahead of the competition.

Mula Gula put in an uncharacteristically dull effort in the Grade 1 Shoemaker Breeders’ Cup Mile on June 18, during which he lost a shoe and afterwords tested with a low white blood cell count. Treatment brought the horse back to his old self, where he went off as the favorite in the $250,000 Washington Park Handicap-G2. His proud owner reported that “people here at Arlington were turning their heads to get a look at him in the paddock. He was so confident and looked so good.” Mula Gula finished second in the July 23 event.

Encouraged by his strong showing at Arlington Park, connections shipped him back to the Illinois racetrack for the $2,000,000 Arlington Million-G1. At Arlington, where aviation fuel distributor Gula’s one-horse army ran against representatives of the ruling families of the
United Arab Emirates and Saudi Arabia and against a horse bred by the Aga Khan, spiritual leader of the Muslims and a descendant of the prophet Mohammed, Mula Gula, the longest shot on the board, delighted his owner and trainer with a third, earning $200,000 in the process. The winner, Chester House, was a son of Mr. Prospector, whose breeding fee the year Chester House was conceived was $170,000 and whose dam, Grade 1 stakes winner Toussaud, had won over $500,000. Mula Gula, the horse who had once been called the “Blue Light Special among Thoroughbreds,” had come a long way.

Dick Duchossois, the owner of Arlington Park near Chicago, shaking hands with Steve Gula. In the background is the statue representing the inaugural Arlington Million when John Henry nosed out The Bart for the win in 1981. Mula Gula ran third in the 2000 running of the
Arlington Million. 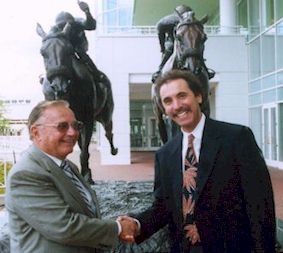 Mula Gula ran once more at four, finishing off the board in the Hawthorne Gold Cup-G3 on October 7. Immediately after the race, Mula Gula developed a high fever and missed ten days of training, prompting Hollendorfer to call an end to dreams of the 2000 Breeders’ Cup coming up in less than a month. With the San Gabriel H.-G2 on New Year’s Day at Santa Anita earmarked as the next target, Mula Gula sustained a minor injury to one of his tendons, necessitating a long layoff.

The decision was made to retire Mula Gula to stud at Ron and Nina Hagen’s El Dorado Farms in Enumclaw, Washington, leaving the door open to the possibility that Mula Gula could return to racing after the breeding season if his tendon was completely healed.